It's axiomatic in the field of architecture that architects need to know, and curry the favor of, lots of millionaires. Virtually all their clients have attained that status. In today's world that's largely the result of inflation, yet even a hundred years ago any major urban structure usually came with a budget of more than a million dollars. In the past only governments, royalty, or the church (with perhaps a few wealthy bankers and merchants thrown in to season the mix) could afford the services of the developing profession of architecture. Zachary Taylor Davis was fortunate in that he had a long list of millionaire friends ready, willing, and able to employ his expertise as an architect.

Davis was on good terms with Chicago's Armour (meatpacking) family, with chewing gum magnate, William Wrigley and his son, William Jr., Mrs. W. D. Curtin, Charles Comiskey, and various church and government officials in the Chicago area where he worked and made his home with his wife, Alma, and their five children (one of whom died as a child). Zachary T. Davis was born in 1869. Davis grew up in Aurora, Illinois. He graduated from the Chicago School of Architecture, a part of the Armour Institute (later the Illinois Institute of Technology). After graduating he served a six-year apprenticeship, part of which was spent as a draftsman for Louis Sullivan. There he worked along side another aspiring architect, Frank Lloyd Wright. After his work with Adler and Sullivan, Davis began his career as supervising architect for Armour & Company, before starting his own firm with his brother, Charles, in 1900. 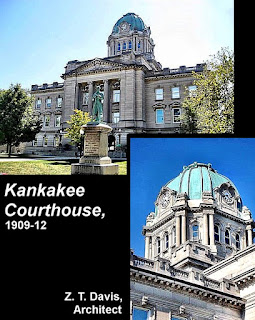 In addition to Mrs. Curtin's stone castle with its nickel-plated "open" plumbing (why it should be "open" I'm not sure), Davis and his brother found work designing St. Am-brose Church (below) in 1904 and the Kan-kakee County Courthouse (left), complete with enough Baroque, Beaux-Arts decora-tion to do justice to a Victorian wedding cake.
The Kankakee County
Courthouse, 1909-12

Davis' big break came a year later when he was hired by Charles Comiskey to design White Sox Park, later known as Comiskey Park (below). To prepare for the project, Davis toured ballparks around the country with White Sox pitcher Ed Walsh. In 1914, Davis designed Weeghman Park for the Chicago Whales, a park which would later become Wrigley Field. Davis was also involved with the design of the original Yankee Stadium.

One of the problems that Davis and other Chicago architects faced during the early years of the 20th-century was the fact that businesses and individuals came seeking their services to design buildings for which there were no historic precedents. As Chicago "skyscrapers" grew taller and taller it made no sense to add a decorative "crown" to the top which could scarcely be seen from the ground. Architects began asking themselves, what was a train station "suppose" to look like? Old styles either hampered the functionality of the building or simply looked silly having been "adapted." Until Davis began to employ steel and concrete, for instance, baseball seating had always been made of wood.

Wrigley Field is located on the North Side of Chicago. It first opened in 1914 as Weeghman Park for Charles Weeghman's Chicago Whales of the Federal League, which folded after the 1915 baseball season. The stadium soon became the home of the Chicago Cubs, one of the city's two Major League Baseball franchises. The Chicago Cubs played their first home game at the park on April 20, 1916, defeating the Cincinnati Reds with a score of 7–6 in 11 innings. In 1921, chewing gum magnate William Wrigley Jr. of the Wrigley Company acquired complete control of the Cubs. Davis's groundbreaking baseball park was named Cubs Park from 1920 to 1926, before being renamed Wrigley Field in 1929. Even though baseball venues have come a long way from Davis's ballparks, Chicagoans would sooner see Lake Michigan drained dry than tear it down for something more modern.

Zachary T. Davis and his brother were also called upon to design accommodations for other sports for which there were little or no precedents in their architectural model books. In Hot Springs, Arkansas, they created Oaklawn, which featured the first glass-enclosed and heated grandstand (below). Horseracing enthusiasts loved it.

Perhaps even more challenging for the Davis brothers was a commission that came in the middle of the Wrigley Field construction. It requested they design a motor speedway with a two mile track, spectator facilities, a polo field, even a golf course in the middle of the race course. With all that, they couldn't exactly go back through their architecture history books to copy the Roman Coliseum or the Circus Maximus. It would appear that they may have visited Churchill Downs, but in large part they were forced to embrace "form follows function.

Billed at the time as the “fastest, safest and most spectacular automobile race course in America.” Speedway Park was a mammoth two-mile wooden board track located on 320 acres of farmland just south of 12th Street between First and Ninth Avenues. Perhaps the most amazing thing about the racecourse was that construction was completed in the course of about 60 days, using 14 million feet of lumber supplied by timber baron Edward Hines. For a time, the speedway put Chicago on the map as a major center of auto racing, However, within three years, the operation was bankrupt, the park sold to become the Edward Hines Jr. Memorial Veterans Hospital.

Zachary Taylor Davis and his firm went on to design numerous churches, a high school, and a number of meatpacking facilities for Armour as well as in the Midwest much like the one (above) in Kansas City. As for the churches such as Ambrose and St. James Chapel (below) at the Quigley Seminary, there was no shortage of models to emulate in design them.