I think it would be safe to say that all parents take pictures of their children, especially in the day and age in which cameras have become as much a part of the cell phones as the communication device itself. Where once cameras were the tools only of professional photographers, and later toys of the wealthy, today even in underdeveloped countries, virtually all parents have, or have access to, some sort of photographic device with which to document the inherent, evolving beauty of childhood. If parents are also artists, they likely carry this penchant for recording visually the lives of their offspring into the realm of painting, drawing, perhaps even sculpture. California artist, Annie Murphy-Robinson has two young daughters, and has done just that with her poignant drawings in charcoal and pastel. 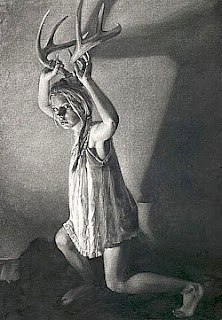 Annie Murphy-Robinson creates sketches in charcoal with the use of sandpaper as a tool. Her subject matter is usually herself or either of her two daughters. Her current work consists of three different subjects: her children, antique childhood toys, and self-portraits. The self-portraits have changed over the years, from being surrounded in white, empty space to being surrounded by nature (below, right). One of her most recent works is of her daughter Emily. Titled Trophy, it is a large-scale charcoal on paper drawing mea-suring 42 by 20 inches (right). 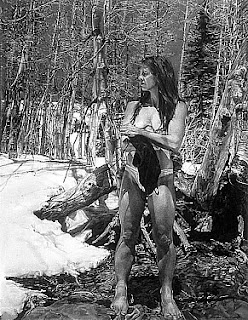 Annie Murphy-Robinson draws furiously, hour after hour, in a small cubicle her hus-band built for her in their garage. Her "cell" is close to, but a world apart from, the couple’s otherwise happy, toy-strewn, daughter-cluttered, ranch-style home in Carmichael, California (a Sacramento suburb). A pastel scene of convention. In her studio, however, tread carefully on the cold, concrete floor. There is a lone, naked bulb burning from the rafters. There is a dollhouse inhabited by some kind of feathery taxidermy specimen. Off to the side, appearing playful and in-nocent, is an apple-red bicycle with chubby training wheels (above).
Self-portrait,
Annie Murphy-Robinson

Here are to be found the tools of her trade--a belt sander, pads of fine-grade sandpaper, a soft, white, smudged gym sock, stubs of charcoal, gobs of erasers, and a seemingly inexhaustible inkwell of dread, joy, pain, mem-ory, exaltation, anxiety, and fear. She draws standing up, on the garage’s back wall, which is painted white. There, in hazy silhouette, the accumulated margin residue of earlier work. Viewed darkly, it appears as the chalked outline of a crime scene pinned to the wall. Some of her drawings, lined in tissue, are piled hap-hazardly on the floor. She peels them off, one by one, like layers of skin. Most are large-scale but highly intimate drawings of her two daught-ers, Emily and Casey. Both are towheaded cherubs.

All of the artworks are drawn from photographs, the portrait sittings of which are austerely lit by a single light source. In many of the drawings, one can see an electrical cord trailing in back like a slithering serpent. The drawings are intense, the subjects invariably solemn. They are far removed from a family scrapbook. They're more of a personal journal. “I always feel guilty when I look at this,” Annie comments as she gazes at her daughter’s expression of longing and appeal. “Like I should be spending more time playing with her than in my studio.” It's the litany of working mothers everywhere.
﻿