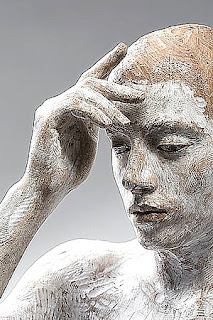 Being a painter, it may sound strange, but I can honestly say that most of the paintings I see in museums and on the Internet don't impress me very much. I guess I operate under the mindset that if I could replicate the painted image with a fair degree of verisimilitude myself, then it can't be all that great. I know, that's not a valid way to judge such works, but in writing about art for these many years, I've kind of become jaded in this area of art appreciation. Very large paintings impress me. Paintings rendered with various glazing techniques do too. Photorealism impresses me--all of which are things I've never had the time, pat-ience, or inclination to attempt (much less master).

In other areas of art, I'm easily impressed by outstanding photography, daring architecture, innovative design, and carved sculpture. Having said that, the Italian wood sculptor, Bruno Walpoth impresses me. Walpoth is a man of few words, somewhat like the Spencer Tracy of the sculpting world. Just like that legendary American actor who downplayed his greatness by reducing his craft to “know your lines, come to work on time, and don’t bump into the furniture,” Walpoth treats his achievements as if they are simply part of a daily routine. He is a wood carver who makes lifelike figures. What’s the big deal?

Walpoth was born in Bressanone, (northeastern) Italy in 1959. He now lives in Ortisei, a small ski resort town in the Italian Alps. He comes from a family of artists. His grandfather and uncle were both sculptors. Wood was the medium he grew up with--lime wood, nut wood, birch, and walnut--among other preferred source material. Walpoth utilizes a chisel and file to free his creations from their original shapeless confines. He was a Master Student of Professor Hans Ladner, at Munich's Academy of Fine Arts.

Under Walpoth's coaxing, men, women, and children emerge from blocks of wood. They seem to have recently been awak-ened from sleep and are just starting to gain their bearings. Walpoth's creations are meditative and introspective—having been dreamed up by a visionary artist, they seem caught in the last stages of a dream themselves. Unlike a subject who is smiling broadly for a photographer or pre-ening for a portrait artist, these characters are stripped of artifice and pretensions. They seem so real because they are so vulnerable and off guard.

The live models for his sculptures are quite real. They represent friends and family—his three sons have serve as models from time to time—as well as people he has seen on the street. Viewing everything with the eyes of an artist, a passing glance from a passer-by can trigger a need to capture that expression. The biography of the person who has impressed him doesn't matter. He is not looking to write a narrative nor trying to communicate a message or convey a lesson. Since his works are lifelike in size and proportion, their physical aesthetics say much about their being human. Walpoth points to the sculptures’ expressions: “When standing in front of the work, one should have the impression that the characters have a soul. I would like to achieve that.”

Art critics think he has accomplished that goal. “Each new figure is a challenge, an attempt by the artist to breathe a soul into carved wood,” says art critic Lisa Trockner. “The true-to-life form of the body is the means to an end—the conveyor of the psyche. The viewer is turned inside out imagining the mental state of the figure. Walpoth’s figures are not a revival of lost ideals, but rather through the presence of the public, they are repositories. They reflect the viewer’s own store of impressions.” 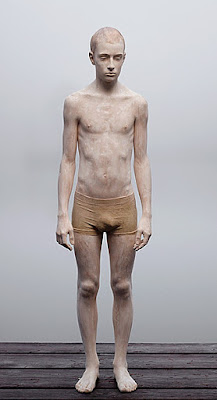 Walpoth's work is minimalist yet monumental. Very often his wooden figures are nude or only partially clothed, so that the bone structure of the apparently androgynous bodies, which he tends to favor, is made clearly visible. While the un-clothed parts of the figures have been sanded down smoothly and exhibit a skin-like texture, the clothed or hirsute areas are rougher, displaying traces of the chisel or of being painted with pastel-like pigment. The smoothly polished skin shows evidence of white paint. Permanent ‘white-ning’ of the nude flesh of the body is achieved through meticulous sanding, working the paint on the surface into the wooden material, thus rein-forcing the pure, virtually translucent character of the skin while simultaneously dehumanizing it. The wood itself becomes trans-formed. It appears to dematerialize even more than when simply coated in white. The material itself therefore becomes irrelevant; it is rather the form that is highlighted.