Notwithstanding the dire economic straits of the 1930s, seldom has a single decade produced so much art, and such great art as this particular era. Normally, when a nation (and in this case, the entire world) suffers a calamity on the scale of the Great Depression, art and artists are the first to suffer. And it would be foolish to claim that wasn't a factor during the thirties, but paradoxically, not to the degree one might expect. In the case of the United States, the Franklyn D. Roosevelt administration stepped in with much-needed jobs and income for the nation's artists, though it would be impossible to ascertain just how much such programs as the WPA actually contributed to this cornucopia of painting, sculpture, and photography of the times. Even perusing a list of outstanding artist (below), who emerged from the various government-supported programs would only suggest their impact. In some cases, such as photographer Dorothea Lang, such support was crucial. In others, such as the movie industry, not so much. During such a dark and seemingly hopeless era, the movies served simply to dull the pain.
Throughout the 1930s and into the early 1950s, many American artists sought an indigenous style of realism that would embody the values of ordinary people in the everyday working world. This search for a national style of art grew out of a wariness of European abstraction and a tendency toward isolationism following World War I. In the wake of severe economic uncertainty, social upheaval, and political shifts that accompanied the disastrous Great Depression, American artists maintained a commitment to projecting a very personal view. Intent on shunning the influence of European art and instruction, these artists struggled to establish and maintain their own identity. Much of this work, especially that now known as Social Realism and American Regionalism, falls within the larger movement known as the American Scene. 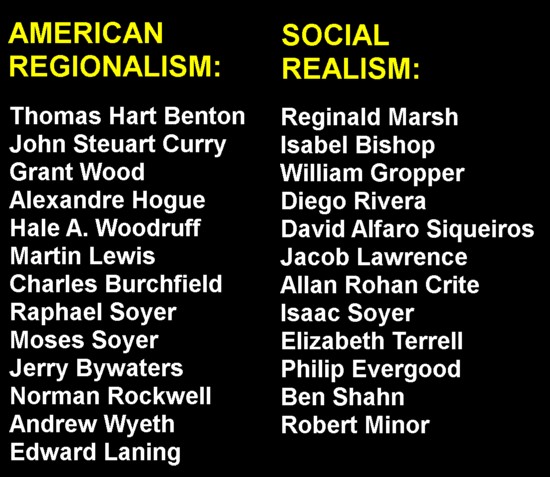 Social Realism is a type of American realism which is overtly political in content, critical of society, marked by its realistic depiction of social problems. The greatest impact of this art movement was felt in the first half of the twentieth century, however. Mexican muralists Diego Rivera, José Clemente Orozco, and David Alfaro Siqueiros strongly influenced many North American social realist and New Deal artists. Some of these northern artists emerged from the Ashcan school, while others, like Ben Shahn, evolved separately.
American Realism 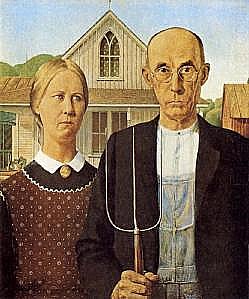 In 1935 Grant Wood published the essay "Revolt Against the City", which defended his regionalist beliefs. Wood argued that the Great Depression was good for American art because it forced many Am-erican artists, who could not finance a trip abroad, to rely on their own traditions, rather than those of Europe. He argued that to look toward America for artistic inspire-ation was neither provincial nor close-minded. Instead, it created an independent style that was both personal and narrative.
American Gothic, 1930,
Grant Wood
Of course Norman Rockwell is the most popular and easily recognizable Regionalist. His work appeared in The Saturday Evening Post for over 40 years. From January, 1930, to December, 1939, Rockwell painted sixty-six Post covers. His last painting for The Saturday Evening Post was published in 1963, marking the end of a publishing relationship that had included 321 cover paintings. He spent the next 10 years painting for Look Magazine, where his work depicted his interests in civil rights, poverty and space exploration.
Although not a painter, the Farm Security Agency (FSA) photographer, Dorothea Lange's dismal images of the 1930s era misery suffered by farmers in the Midwest stands today as the very face of the Great Depression. Without her government-sponsored "art of desperation," we might well have forgotten by now the effects of the gross economic and land mismanagement, serving as the direct cause of the social upheavals which this catastrophic period inflicted upon the American people. Instead, Lange's groundbreaking art stands as a vital component in the history of the past hundred years--a constant reminder lest we stumble once more.
The 1930s was not all marked by days of dark, desperate, dismal dread. A new look was taking shape in American art, a first glimpse of a brighter future. It was called Streamline Moderne at the time, or sometimes termed Art Moderne. It was a late type of the Art Deco architecture and design that first emerged in the 1930s. It was an architectural style emphasizing curving forms, long horizontal lines, and sometimes nautical elements. Streamline Moderne was both a reaction to Art Deco and a reflection of austere economic times. Sharp angles were replaced with simple, aerodynamic curves. Exotic woods and stone were replaced with concrete and glass.
Before the 1930s ended, such influences had seeped into automobile design and many other consumer products. Although other styles and art eras have since come and gone, the streamline look remains as evidenced by the German Schlorwagen (below) dating from 1939. Had it not been for WW II, we might now be driving around in Schlorwagen "beans" instead of the more plebian Volkswagen "bugs." As for the Italian Bugati...they were a little too patrician for American tastes.

In 1939--a whole seventy-eight years ago, comic book artist Bob Kane had an idea for a masked vigilante; a hard-as-nails detective, who would ruthlessly crack down on crime just like The Shadow and The Phantom had been doing for years in pulp stories of their own. That masked vigilante was called Batman. Today, in the closing days of 2017, that character has become as recognizable as any in pop culture, becoming one of the most influential fictional characters of all time...except, of course, for Superman (who's a year older than Batman). The super guy was originally drawn by Ohio cartoonist, Joe Shuster.

Not all American artists from the 1930s rejected, or couldn't afford, studying art in Europe. Architects continued to flock to Paris' Ecole des Beaux Arts as did designers, at least until May, 1940, when the Nazi's hit town. We saw the International style in Greyhound bus terminals (now all demolished), Frank Lloyd Wright's Fallingwater, and William F. Lamb's Empire State Building, the paintings of Robert Delaunay (bottom, who was French), even the Paris travel posters (below) urging artists to come to town. The 1930s were a wild and bumpy ride, but what emerged in the decades after the war owes much to the creative seeds sown in those tumultuous ten years.