Did everyone have a Merry Christmas yesterday? Well, that's over for another year. As a kid I wished Christmas Day would last all year long. As I've grown older, more mature, and more sensible, all I can say is thank God it doesn't. I couldn't afford the stress and strain (not to mention at least 365 gifts or up to 364 more shopping days until Christmas). That would be enough to make me seek refuge with the Easter Bunny in his subterranean abode. It's not that I don't like Christmas. I love Christmas, but any more often than once a year would be too much of a good thing. The day after Christmas I'm always more than ready to get back to the silliness of everyday life.
Speaking of silliness (either everyday or exceptional), have you ever seen the art of the Flemish painter Abraham Teniers (pronounced Ten-years)? Among other things, he painted singeries--monkeys and the occasional cat involved in human activities (above). The Flemish engraver Pieter van der Borcht had introduced the singerie as an independent theme around 1575 in a series of prints, which are strongly embedded in the artistic tradition of Pieter Bruegel the Elder. Hand-in-hand with this genre, Teniers was also an astute observer of human nature with many of its 17th-Century vices (in those days predominantly gambling, drinking, and smoking). The newly minted Protestants of northern Europe were in no mood for the open depiction of any more serious vices like sex.
﻿ 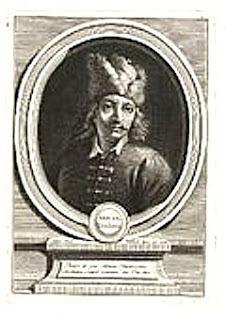 Abraham Teniers was born in Antwerp in 1629. He was the son of the prominent genre painter David Teniers (the Elder). What makes Abra-ham Teniers interesting, not to mention dev-ilishly tricky to write about, is the fact that the elder Teniers trained all four of his sons to be painters, David (the younger, who was actually the oldest of the boys), Juliaan III, Theodoor, and Abraham (the youngest of the four). Only after I started researching the brood did I realize that David (the younger) was by far the best and most successful artist of them all (including his father). However, by that time I was well into the project and not inclined to "switch brothers" in the middle of my stream of thought.
Abraham Teniers,
by Gérard Edelinck.

Abraham Teniers is mainly known for his genre scenes which depict themes executed in a style not dissimilar to those of his father and brother, David, who are his presumed teachers. His favorite subjects were village feasts with peasant dancing or playing music (above); inns with peasants indulging in drink, food and smoking (below); and monkey singeries (top). Like his brother, David, before him, Abraham found favor at the court of the art-loving Archduke Leopold Wilhelm of Austria. He was, at the time, governor of the Southern Netherlands. He appointed Abraham Teniers as court painter.

﻿ In a more reverent vein, we see Teniers' The Temptation of St Anthony (below), dating from 1645. As a bit of background, there were monks at this time (and long before) who set up their cells in complete solitude, either in the desert, in a forest, or who found themselves a remote cave. Depicting the temptations of St. Anthony, both before and after Teniers, had was a favorite content area for artists as it offered a morally acceptable opportunity to combine nude prostitutes (temptations) with religious piety. There were, however, no naked women among Teniers' temptations, which appear much more "wholesome."