The Bible has long been the richest repository of subject matter artists have ever explored. From the New Test-ament comes the nativity, the last supper, the crucifixion, and the re-surrection. The annunciation, the ascension, and one or two others would not be far behind in this regard. From the Old Testament, while the choices are much more plentiful, the first and foremost popular story, insofar as artists are concerned, would un-doubtedly be that of Adam and Eve. It's a great story with interesting scenes and themes, redundant in the beauties of nature and the glory of God. But quite apart from all that, there can be little doubt that the primary reason the Garden of Eden has long been the most painted subject in all he Bible, is the one simple fact--Adam and Eve were naked.
﻿
Although Michelangelo, in painting the Sistine Chapel ceiling between 1508-12, was far from the first to succumb to the socially acceptable pairing of both male and female nudes in the same scene, he was the first to combine the Temptation of Eve and the Expulsion from the Garden into a single scene (top). It's interesting to note the "influence" Mich-elangelo apparently had on Raphael, who was working nearby on The School of Athens about the same time. Raphael stopped short of actually copying the painting master he so admired, but not by much. The Adam and Eve figures in Bosch's Garden of Earthly Delights (left) give evidence of just how advanced Michelangelo's intuitive understanding of human anatomy was as compared to that of his peers. But Raphael was not the only artist to borrow elements of the Adam and Eve story. The fact is, Michelangelo borrowed from Masaccio's Expulsion from the Garden of Eden (top-left, below) from a hundred years earlier in his depiction of the subject. Moreover, Michelangelo was not satisfied with the combining of the Temptation and Ex-pulsion; he also de-voted an entire panel to The Creation of Eve (above). Except for a rather static and unsuccessful attempt by an unknown Byzantine mosaic artisan (below, left), no artist until then had ever tried to depicted that aspect from Genesis.

Before Michelangelo and the Italian Renaissance, as much as they may have been attracted to the depiction of Adam and Eve, most such artists' efforts were marked by technical ineptitude and difficulties with the compositional complexities present-ed in tastefully depicting two nude figures in strict accordance with the scriptures. Byzantine artists had at-tempted to render soft, naked flesh in mosaics and failed miserably (left). Up until that time, artists sim-ply weren't trained in depicting nude figures. What few who tried (such as Masaccio) could best be termed "self-taught." In fact, aside from the Italian "big three," Leonardo, Mich-elangelo, and Raphael, most of the best nude figures during the 15th and 16th-centuries came from up north, as seen in the work of Jan van Eyck and Albrecht Durer (above). 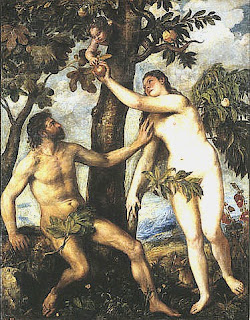 After the creative genius of the Renaissance faded during the Mannerist period of the late 16th-century and the Baroque 17th-century, a new wave of artists not only learned from their Renaissance masters, they sought to surpass them as witnessed by the work of Peter Paul Rubens and Jan Brueghel (below), as well as Titian's near-copycat version of Rubens' Adam and Eve scene (left). During the next three-hundred years, Adam and Eve, served as something of a blessing to painters attracted to images of the nude figure, especially since the biblical tableau gave equal emphasis to both male and female nudity. This period from the Baroque era on also serves to illustrate the evolution of (mostly male) ideals of feminine beauty. Gradually, Adam developed better muscle tone while Eve became more slender with highly accurate anatomical curves the result of long hours artists willingly spent drawing live nude models afforded by local and national fine arts academies springing up all over Europe.

As artist and their patrons adopted the story of Adam and Eve from the scriptures we gradually notice a lessening of attention and devotion to Genesis more and more toward adapting the nude figures in pursuit of the opportunities they presented for erotic plea-sures. Molinari in the 18th-century and es-pecially Viniegra, Dubufet, and Courtois (above) in the 19th-century found they could "use" the biblical source to allow them greater and greater creative freedom in depicting the marital relationship inherent in the story. Along with the slightly less socially ac-ceptable mythological figures cast in nude depictions, there developed an all male art clientele which snapped up such art almost faster then their academic artists could paint it. Some called it "boudoir art." Their wives probably had less euphemistic terms for it.

With the dawn of the 20th-century, and the rapid development of photography, postcard pornography gradually ate into this lucrative art of framed "Adam and Eve" eroticism. Modern art became more self-contemplative, and less able (or willing) to arouse the prurient art appreciation of wealthy clients. Artists who continued to depict the Genesis couple often found themselves creating what could best be described as "Sunday School" art (right). Yes, not all depictions of Adam and Eve were nude. The Mormon Eve certainly had a style-conscious hairdresser, though her frock is a bit frumpish...not a fig leaf in sight.