A while back, as I was working on a discourse on drawing noses, I kept running into photos of scantily clad "ladies" adorning the forward portions of airplanes. Only gradually did I realize that in typing "nose art," into my search engine, I'd accidentally landed on a generic reference to that art which, for most of the 20th-century, had adorned the "noses" of combat aircraft. It's not likely the Wright Brothers painted a "Gibson Girl" on the nose of their Kitty Hawk Flyer (I don't recall it having much of a nose, in fact), but such feminine flying mascots seem to be almost as old as aviation itself. Although such art is usually thought of in terms of wartime fighters and bombers, I found a photo of a 1913 Italian flying boat painted to look like a fish. 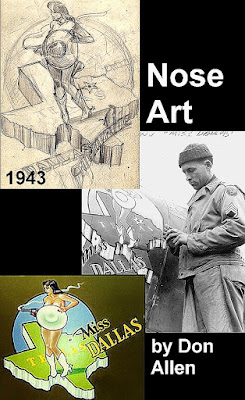 Present-day artist, David Uhl's Georgia Peach (above, left) pays tribute to the art and artists of our wartime past, though he obviously romanticizes the creative process somewhat. It's unlikely such artists had live models (stateside perhaps), which he seems not to be paying much heed to in any case. The photos of one of Second World War's most prolific artists, Don Allen at work (right), present a much more accurate depiction of the art of "nose painting." Don Allen, born in 1920, was about twenty-three when, while stationed in England, painted his first female image on the nose of a P47. This led to Miss Dallas (right) which eventually led to at least 37 other planes. He charged the pilots the equivalent of $35 in today's currency. After the war, Allen returned to his hometown of Cleveland, Ohio, where he worked the rest of his career as a graphic designer while also recreating from memory or sketches as many of his nose art works as he could. Incidentally, Don Allen is still living today. He's 95 years of age.

Nose art first got its start during WW I though it seems to have originated on the Western Front in Europe as a means for German and Italian dogfight pilots to personalized their biplane fighters. Often the pilots painted their mascot images themselves, usually featuring heraldic designs, cartoons, or animals of some sort (must have been in the days before they invented painted ladies). It wasn't called "nose art" back then either, in that it was usually to be found on the main body of the aircraft.

One of the earliest, and most persistent nose art motifs has been the open-mouthed shark, though some of the first ones, painted by amateurs, were more whimsical than fierce or frightening. This image, in various incarnations, was probably first used by the British, followed by Americans (above). By the end of the war, just about every air corps in the skies (on either side) had adopted some version of the smiling (fearsome?) denizen of the deep as a means of emboldening their pilots and intimidating their foes. The effect was probably minimal in both instances; but, minus the wings, the planes do bear a striking resemblance to sharks.

During the Second World War, nose art came into its own. At the height of the war, nose artists, whether professional civilian artist or talented servicemen, were in very high demand. For the most part, they were paid in cash or goods (often alcohol,) though sometimes they were paid nothing at all. Some units had talented artists. Those that did not were forced to recruit from outside. Some nose art was signed, but most was not. Of course, professional artists produced more polished work, than amateur G.I. artists. The chart above provides a rather nude sampling of such work. Most such girls were somewhat clothed, though some rather immodestly so. Sentimental Journey (top) is likely the most famous and iconic of these WW II aircraft. It's a B-17, which today is frequently flown to airshows throughout North America. The nose art features Betty Grable, the number one pinup girl of the World War II era. The aircraft's name comes from a 1945 song by Doris Day.

Like virtually all types of art, nose art has changed over time, reflecting the prevailing tastes and social values. WW II nose art was usually risqué, sexist, at best suggestive, at worst nude verging on the obscene. Korean War nose art was less so. By then the bikini had arrived. Nose art from the Vietnam War was less sexual, more cynical, morbid, and often dissident. During the Gulf War, sexually provocative art was removed before aircraft being deployed to Saudi Arabia to avoid offending inhabitants of the area. Bikinis were painted over to became long black dresses. After the war, artists often restored the images to their original state upon the request of the crews and pilots. 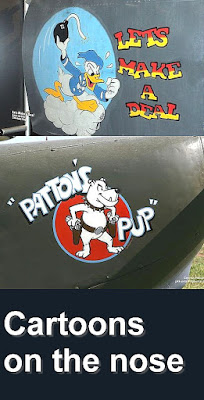 After Vietnam, there was a lengthy break in the creation of nose art, probably because earlier restrictions were being enforced during peacetime. Another factor that holds to this day, was that the Strategic Air Command (SAC) regularly transfers aircraft between units, which discourages the practice of painting noses. The whole aircraft is repainted each time. During the 1980s, when the public learned that air crews were copying World War II pin-up art, there was protest. Time magazine ran a story, “Bimbos for Bombers,” which drew an avalanche of negative mail. The National Organization of Women (NOW) and the National Women’s History Project both voiced their objections to such art. On the other hand, some air force pilots, crews, and artists, including both men and women, strongly defended nose art. Partially as a result of this controversy, cartoon and animal figures made a comeback as seen in some of the non-sexist cartoon images (left).

Nose art is a form of Folk Art. It uses an individual icon that is unofficial and sometimes unapproved. Such painting was, and is, usually done off-duty and often at night, after work or combat. Nose art is also folk art to the extent that it represents a specific group or “folk” within popular culture, in this case, young males (especially in World War II) who are engaged in combat. Anonymity of the artist is common to both folk art and military aircraft art. Few artists signed their work. They were not concerned about personal recognition, but rather in creating a mascot for the crew. Another folk art characteristic that is applicable is the preservation of tradition (above). There is nearly a century of continuity as to nose art’s content, purpose, form, and painting materials (below). Likewise, the artist’s ingenuity in drawing from everyday materials for his medium is yet another connection to folk art.