During the past few months the chain link curtain the U.S. has imposed around the island of Cuba for the past fifty-four years has gradually begun to rise, revealing a kind of tourist time capsule of picturesque villages, 1950s era hotels, restaurants, automobiles, and sunny beaches. I'm not going to get into the politics involved except to say, it's about time. For the past fifty years what little we've seen and known culturally about this tropical "elephant in the living room" of the Caribbean has come second-hand through the influx of refugees during that period. For decades cruise ships have sailed all around the island as if it were a hornet's nest. I won't call it a "tropical paradise." No Communist country can claim that designation, quite aside from the fact its been a trite, worn-out, travel poster broadside for most of that fifty-four years. The better description would be a cultural treasure buried in the sand by the island's Marxist masters. How soon and how much of that treasure will come to light to be shared and enjoyed with the rest of the world remains to be seen. Among several other Cuban artists I've highlighted in the past, the paintings of Victor Manuel Garcia Valdes shines forth as one of the brightest gems this treasure island has to offer.
Before we go further I should note that from the mid-1920s when he spent some time in Paris, the artist signed his paintings "Victor Manual"...most of the time...a fact that drives art authenticators crazy (or perhaps bananas) in this case. Victor Manual (the Garcia Valdes is apparently optional) was born in 1897 and grew up in Havana. He was a precocious little fellow, even at the age of six. By the age of twelve, Victor was studying art at Escuela Nacional de Bellas Artes "San Alejandro", the most recognized art school in Cuba. By the time he was fourteen the boy started to act as an unofficial professor of elementary drawing at the school.

Victor Manuel studied with Leopoldo Romañach, a famous Cuban painter, for some five years. Nevertheless, it wasn't until 1924, when he was twenty six, before Victor Manual had his first personal exhibition. Following that he departed for Paris for the next two years to hone his painting skills in what was then the art capital of the world. Upon returning home in 1927, Victor Manuel participated in an exhibition of the Painters and Sculptors Association of Havana, a group con-sidered to be a major starting point for Modern Art in Cuba. For the next two years, Victor Manuel dedicated himself, to the training of other Cuban painters, free of charge, whereupon, he went back to France. He also visited Spain and Belgium before returning to Cuba again in 1929. It was in that year he created his most famous painting, La Gitana Tropical (The Tropical Gipsy, above, right), popularly known as "La Giaconda Americana" (The American Mona Lisa).

Although Victor Manuel is best known for his female portraits, he also painted both urban and rural landscapes. Moreover, durng the latter years of his life, his pictorial content all but disintegrated into the prevailing style of Abstract Expressionism. Nonetheless, the overwhelming weight of his work centers on the lovely feminine faces of his island homeland (above). There are hundreds of them each showing the influence of Amedeo Modigliani stirred together with traditional Caribbean style, color, and painting technique. Victor Manuel Garcia Valdes died in 1969. During the final years of his life, he devoted his time to his original first love, drawing, as seen in his poignant sketches of his mother and an attractive loved one (below).
﻿ 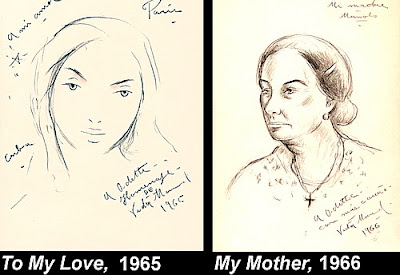