On this date, 216 years ago, the future President Millard Fillmore was born in a log cabin in Moravia, Cayuga County, amid the Finger Lakes region of western New York State. That's roughly halfway between Rochester and Syracuse and somewhat to the south. Our thirteenth president was born into a poor family the second of nine children. Fillmore had little schooling. At the age of fourteen, his father arranged an apprenticeship with a cloth maker. Rather than spending his income on candy, the uneducated Fillmore bought a dictionary. When his boss wasn’t looking, he’d flip it open and read. Living on what was then the frontier during the first two decades of the 19th-century, Fillmore's education was very much like that of a slightly younger future president, Abraham Lincoln. Like many artists, both now and then, we might say these two, and a few other future presidents, growing up on the edges of civilization at the time, were all "self-taught." George Peter Alexander Healey's official White House portrait of Fillmore (above) painted in 1857, after he left office in 1853, seems to emphasize, with its finger-pointing pose, this element in the man's background.

Millard Fillmore was what we could also call an "accidental president." He was elected vice-president alongside President Zachary Taylor in 1848. A year or so later in 1850, having apparently devoured way too many cherries and milk, Taylor became ill, then died in office. The portrait by Alonzo Chappel (above) was likely done about the time Fillmore became President. Fillmore was the last of the Whig presidents inasmuch as his party literally fell apart over the spread of slavery in the decade running up to the Civil War. In 1852, the northern Whig's denied him a spot on their ticket in favor of Mexican War General Winfield Scott, who was defeated by Democrat, Franklin Pierce. Four years later, Fillmore ran again, forming a third party of his own (the American Party), only to come in a distant third behind Democrat, James Buchanan, and Republican, John C. Fremont. Consequently, Fillmore became one of the most inconsequential presidents of all time.

Fillmore served three terms in Congress between 1837 and 1843. In 1948, at their convention, a group of Whig pragmatists, having nominated General Zachary Taylor (a slaveholder from Louisiana) for President, sought to balance the ticket, by running Fillmore for Vice President. Millard Fillmore came from a free state, had moderate anti-slavery views, and could help carry the populous state of New York. Other than that he had very few qualifications for even the vice-presidency, much less in becoming President. Moreover, the 1850s were a rough time to be President as just the spread of slavery to western territories (not slavery itself) became a prime bone of contention between the political forces of the North and the South. Fillmore's unpopularity stemmed from his support of the Compromise of 1850 (which served to postpone the Civil War for ten years), and his signing of the Fugitive Slave Act, both of which served to split the Whig party right down the middle and insure his political demise. His actual demise didn't occur until 1874. 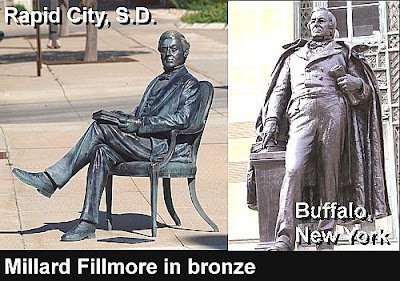