It never ceases to amaze me how ignorant so many people are of geography. Even in finding on a map some of the lesser-known states in the United States, they have to do more than a little searching. Ask most people where Montenegro, or Bosnia, or Serbia, or Croatia might be located and they'd not have the foggiest idea. Just for the record, they're collectively known as the Balkan countries located along the Dalmatian coast east of the Adriatic Sea. Even with a fairly precise geographic description such as that there might come a blank look followed by the question, "Where's the Adriatic Sea?" Before we can talk about a country's art and artists, it seems to me knowing where in the world that country is located should be a prerequisite. Maksimilijan Vanka was an outstanding artist born and trained in Croatia, but who emigrated to the United States in 1931, settling in the Pittsburgh area where his best know work graces the walls of St. Nicholas Croatian Catholic Church in Millvale. You may not know where Millvale is but I'd hope you have some idea where Pittsburgh might be.

Millvale, Pennsylvania, is an industrial suburb northeast of Pittsburgh where a large number of Croatian immigrants settled around 1900 to work in the Pittsburgh steel mills. Most were highly religious and most brought with them their ethnic version of Catholicism. Two neighboring Croatian Catholic parishes sprung up, Millvale, and just to the west, Troy Hill, each with their own parish church. The two parishes were combined in the late 1990s. However, two such nearby places of worship, in the age of the automobile, were more than the parish could afford. One had to die that the other might live. After a lengthy court battle, the Troy Hill Croatian Catholic Church met with the wrecking ball in 2013, the property sold to the state for the widening of Route 28 through the neighborhood. Fortunately the Millvale church survived; and with it, the impressive murals of Maksimilijan Vanka.

Maksimilijan Vanka was born in 1889, possibly the illegitimate son of Rudolf Hapsburg, the Crown Prince of Austria, and heir to the Austro-Hungarian Empire (had not WW I interfered). The boy was sent to live with peasants, but at the age of eight was discovered by his maternal grandfather, spending the rest of his childhood living in a castle. As a young man, Vanka studied art in Zagreb, Croatia, and Brussels, Belgium. During World War I, being a pacifist, Vanka refused to serve in the regular army, choosing instead to serve with the Belgian Red Cross. After the war, he taught art in Zagreb.

Vanka's wife was Jewish. In the early 1930s, as anti-Semitic fever grew in southern Europe, Vanka had the foresight to flee with his wife and young daughter to America, settling in the Croatian community north of Pittsburgh. In 1934, he first exhibited his landscapes, still-lifes, and paintings related to Croatian culture and nationalism in Pittsburgh. As a result, he came to the notice of the Rev. Albert Zagar of St. Nicholas Millvale Parish. Three years later, in 1937, Zagar commissioned the murals. Vanka's daughter, Peggy, recalls that her father worked painting the murals at a furious pace. He usually worked between 16 to 18 hours daily through the entire week. He worked without a watch so as not to be influenced by the time of day. The murals, some 20 in all, cover the walls and ceiling of the church. They were painted in two, eight-week-long sessions, one in 1939 and the other in 1941. The starkly vivid murals before and after the war are strikingly different.﻿

Murals painted before the war depict Croatian immigrants coming to America to seek a better life, grateful to have escaped the slaughter taking place in their homeland. Murals painted after the war are much more striking and vivid with dark and haunting themes. Vanka was a committed pacifist, the intensity of his beliefs depicted clearly in his murals. One scene is of the Virgin Mary coming between two warring soldiers. Another depicts two soldiers battling each other, but this time it is Jesus who attempts to intercede. One of the soldiers accidentally thrusts his bayonet into Jesus' heart, causing a look of utter surprise and pain on Jesus' face. Another mural features a foreboding figure, dressed in black, with a gas mask over his face, depicting the horrors of war and the evil of those who would send men into war. To Vanka, there were no justifiable reasons for war. Maxo Vanka lived to be seventy-four years of age. He drowned in a swimming accident off the coast of Puerto Vallarta, Mexico in 1963. 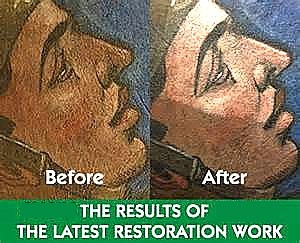 In 1990, church members became alarmed at the deteriorating condition of the Vanka murals. They formed the non-profit Society to Preserve the Millvale Murals of Maxo Vanka. In the years since, they have been leading a campaign to clean, restore and properly light the murals. The group is committed to raising approximately $600,000 in two phases. The most recent report has them having raised $120,000 toward their Phase I goal of $230,000, which will provide for the cleaning and restoration of seven murals; installation of energy-efficient lighting; and expansion of public information. A substantial loan from the Pittsburgh Catholic Diocese has been granted for building upgrades. Restoration of the remaining 15 murals is included in Phase II funding, which is forecast to cost some $350,000.